JAMES JUO was a partner at Fulwider Patton LLP, one of the oldest intellectual property law firms in Los Angeles, where he advised clients on intellectual property matters. He has successfully obtained and enforced patents and trademarks, and opined on the scope and validity of patent and trademark rights. A registered patent attorney, as well as a former patent examiner, he also advised the American Inventor television program on patent issues. He has worked on a range of technologies, including medical devices such as electrode catheters, stents, grafts, and prostheses, as well as electronic ballasts, computer processing, aerospace, and consumer products.

His article, “A Prosecution Bar In Patent Litigation Should Be The Exception Rather Than The Rule” was cited by the U.S. Court of Appeals for the Federal Circuit in In re Deutsche Bank Trust Company Americas and Total Bank Solutions, LLC, 605 F.3d 1373 (Fed. Cir. 2010) as containing a “comprehensive” review of trial court decisions regarding protective orders involving patent prosecution. And his article, “A Quantum Of Originality In Copyright” was selected for inclusion in the 2010 edition of the annual Thomson Reuters (West) Intellectual Property Law Review as one of the best intellectual property law articles from the past year. Other published articles include “Egyptian Goddess: Rebooting Design Patents And Resurrecting Whitman Saddle” in the Federal Circuit Bar Journal; "Notice That Registered Trademark In The Window?” in the John Marshall Review of Intellectual Property Law; "Split Over the Use of the CFAA Against Disloyal Employees" in The Federal Lawyer; "The Reasonably Certain Ethics of a Minority Report" in The Bencher; and "Beware the Witch's Brew of Rhetorical Hyperbole" in Orange County Lawyer. 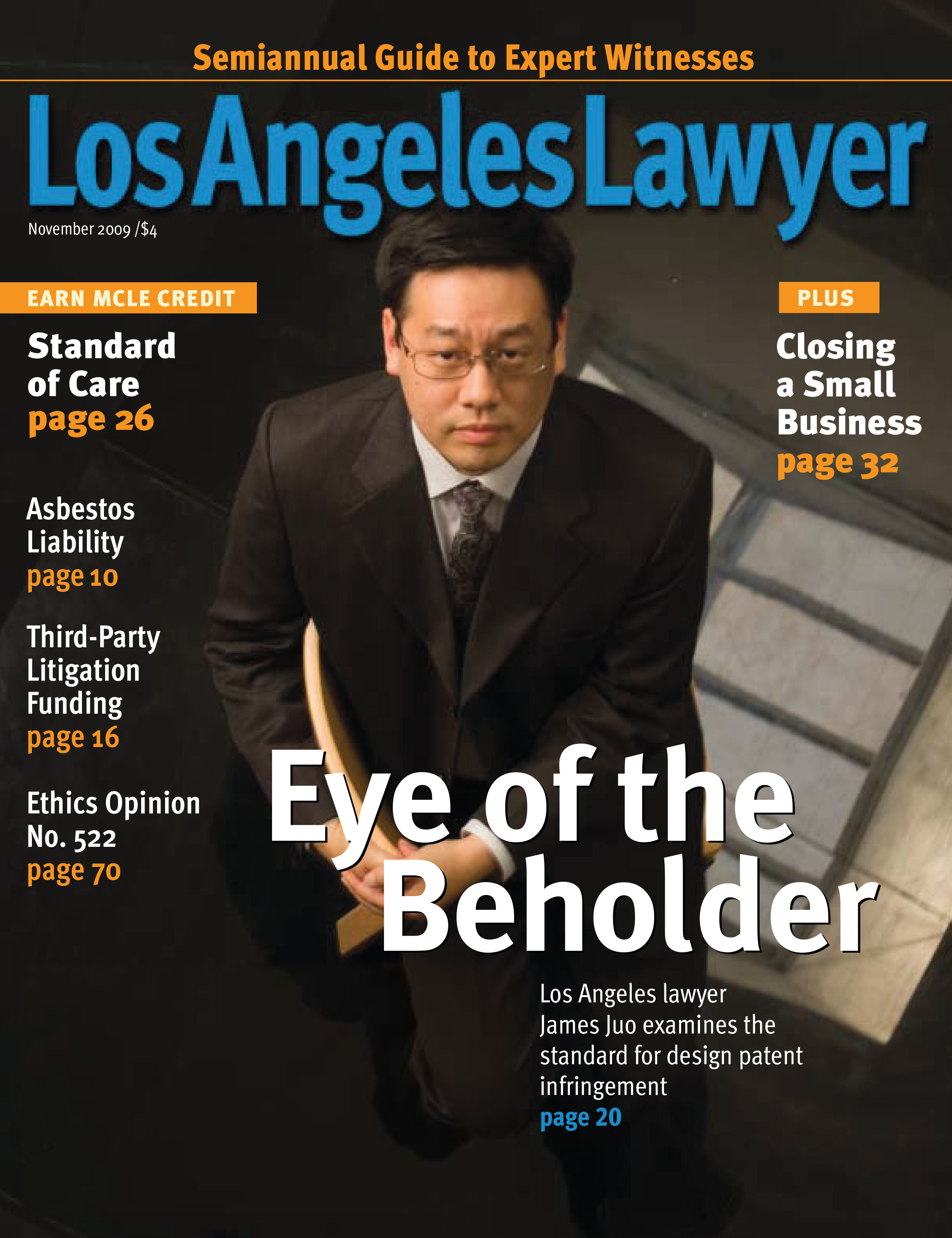 Mr. Juo led a panel discussion at the Design Patents in the Modern World conference held at Stanford Law School. At the 83rd Annual Meeting of the California State Bar, he co-presented a program entitled “From Batman to Paris Hilton: Design Patents for Aesthetic Attorneys.” Los Angeles Lawyer magazine featured Mr. Juo on the cover of its November 2009 issue for his article, “Eye of the Beholder” concerning design patents.

Mr. Juo has volunteered as a moot court judge in the National Entertainment Law Moot Court Competition held annually at Pepperdine University. And he has participated as a volunteer attorney settlement officer for unlawful detainer cases at the Los Angeles Superior Court in Torrance. He also is a member of the Colorado IP Inn of Court.

Mr. Juo earned his Juris Doctor from George Washington University in 1993, and his Bachelor of Science in Electrical Engineering from Clarkson University in 1989. Mr. Juo is admitted to the bar in California and Virginia, and is registered to practice before the U.S. Patent and Trademark Office.